What It Takes For Non-Violent Movements To Succeed 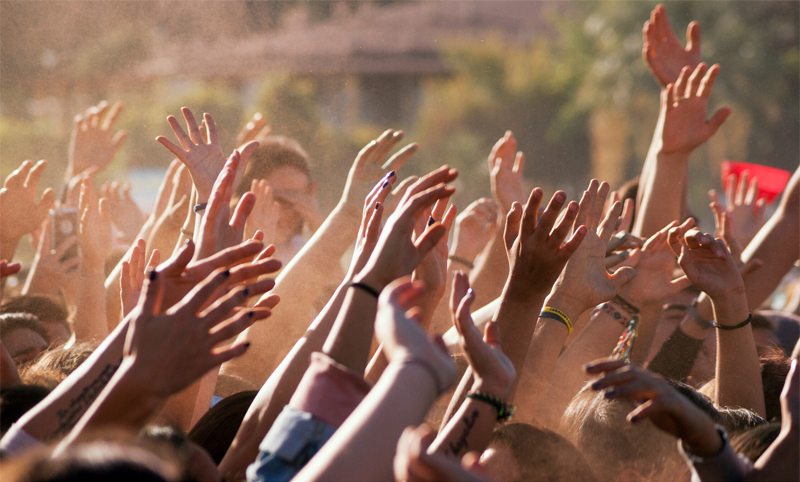 A study showed that the non-violent resistance movements had a success rate of 53% –  twice as effective and likely to succeed as compared to their violent counterparts.

What is it that makes non-violent resistance movements twice as successful?

First, the size and diversity of a movement directly impacts its success in the long run. Research shows that non-violent resistance movements make people from diverse backgrounds feel more comfortable in joining the movement. This leads to widespread, large-scale participation as well as participation which is representative of society as a whole. Further, movements which are youth-led and women-led are far likelier to be non-violent in nature, and thus, more likely to succeed. The Chenoweth study of non-violent movements over time observed that when movements did achieve a large scale, if this resulted in 3.5% or more of that nation’s population participating, they almost always succeeded.

Second, sustaining a non-violent movement over time is necessary to bring about change. This requires rigorous offline planning, designing long-term implementation strategies and parameters to monitor progress. Most importantly, sustaining a movement requires that people continue to stay non-violent even when the state resorts to violence or pushes them towards violence. Resilience when faced with violence, thus, becomes an important factor in determining the outcome of a non-violent movement.

Third, protests and mass demonstrations while popular non-violent resistance mechanisms, when used in isolation reduce the odds of a movement being successful. A far more likely to succeed resistance movement is one which utilizes a combination of non-violent techniques in the form of both action or inaction. For example, combining protests with a labour strike is likely to be a more successful technique as it directly impacts the economy of a nation. Thus, research tells us, using a blend of different tactics which impact the regime in power are better at ensuring that a movement is not ignored by the state.

Finally, a key factor enabling the success of non-violent resistance movements lies in their ability to change the opinion of and garner support from an individual or a body which otherwise supports the state and whose cooperation the state relies upon in order to function. These individuals or bodies, such as security forces, civil servants, economic bodies etc., are imagined as “pillars of support” to the regime, and “shifting their loyalty” by means of non-violent resistance is crucial to the success of the overall movement. 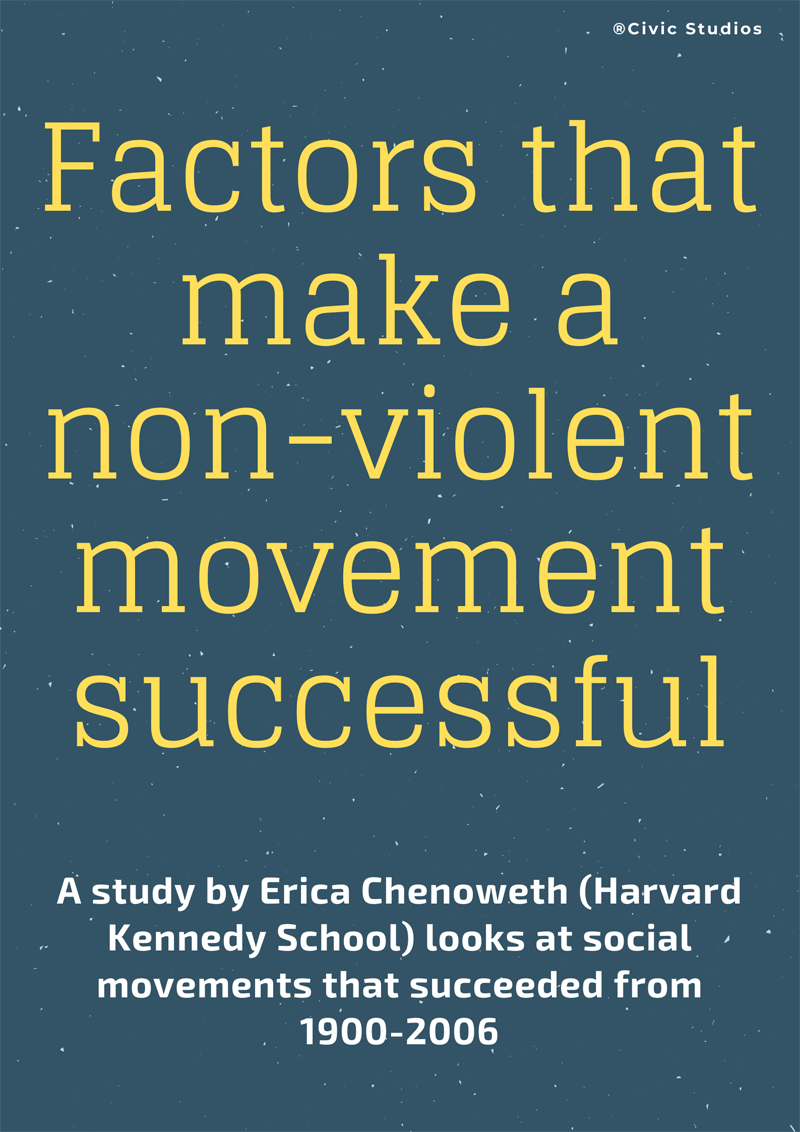 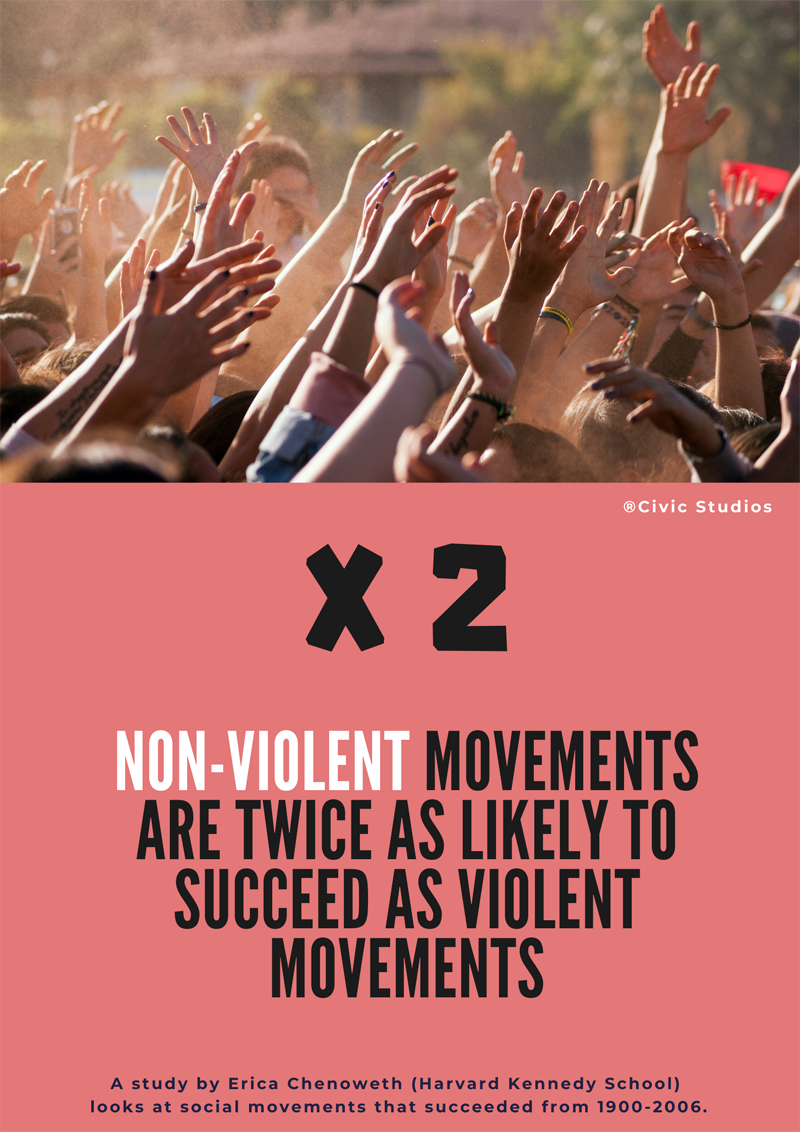 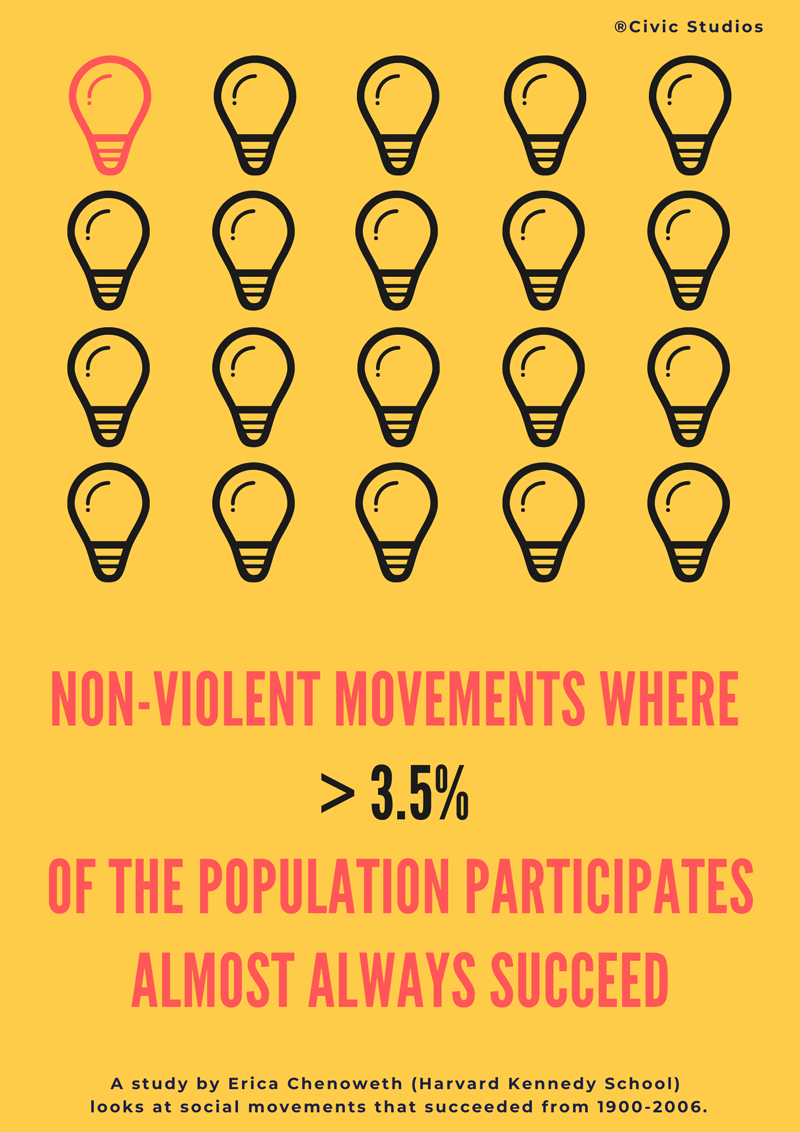 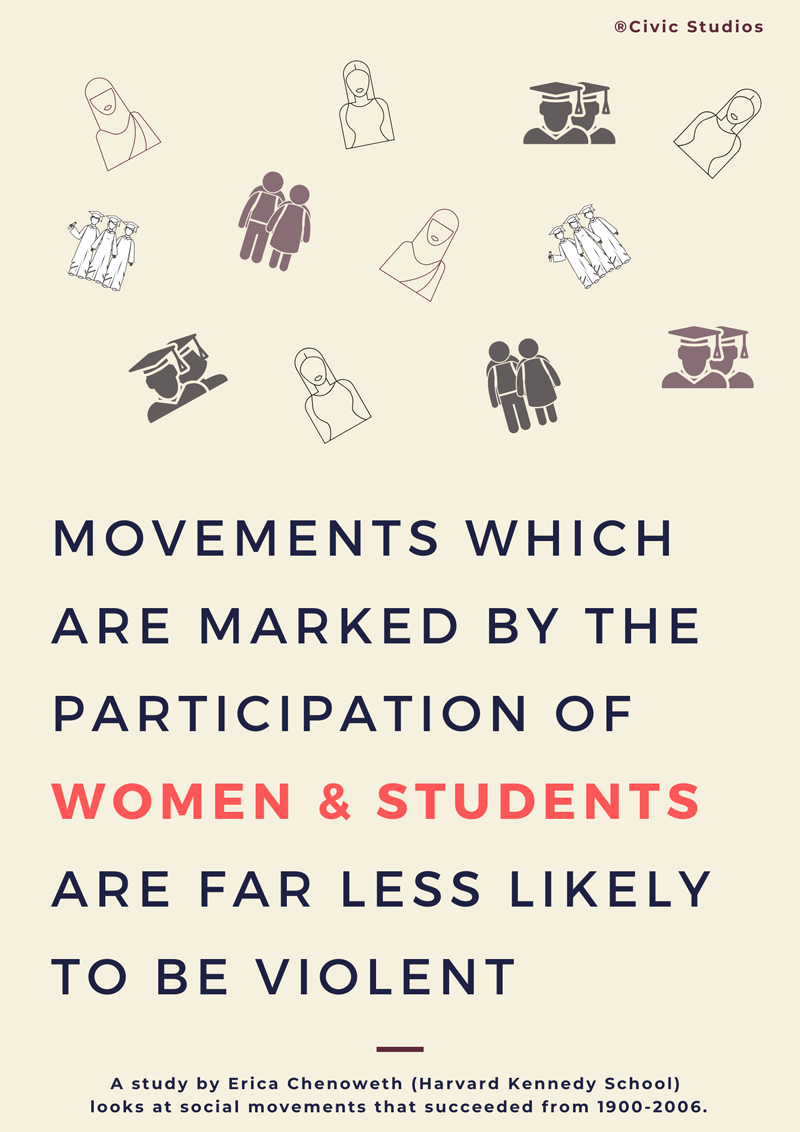 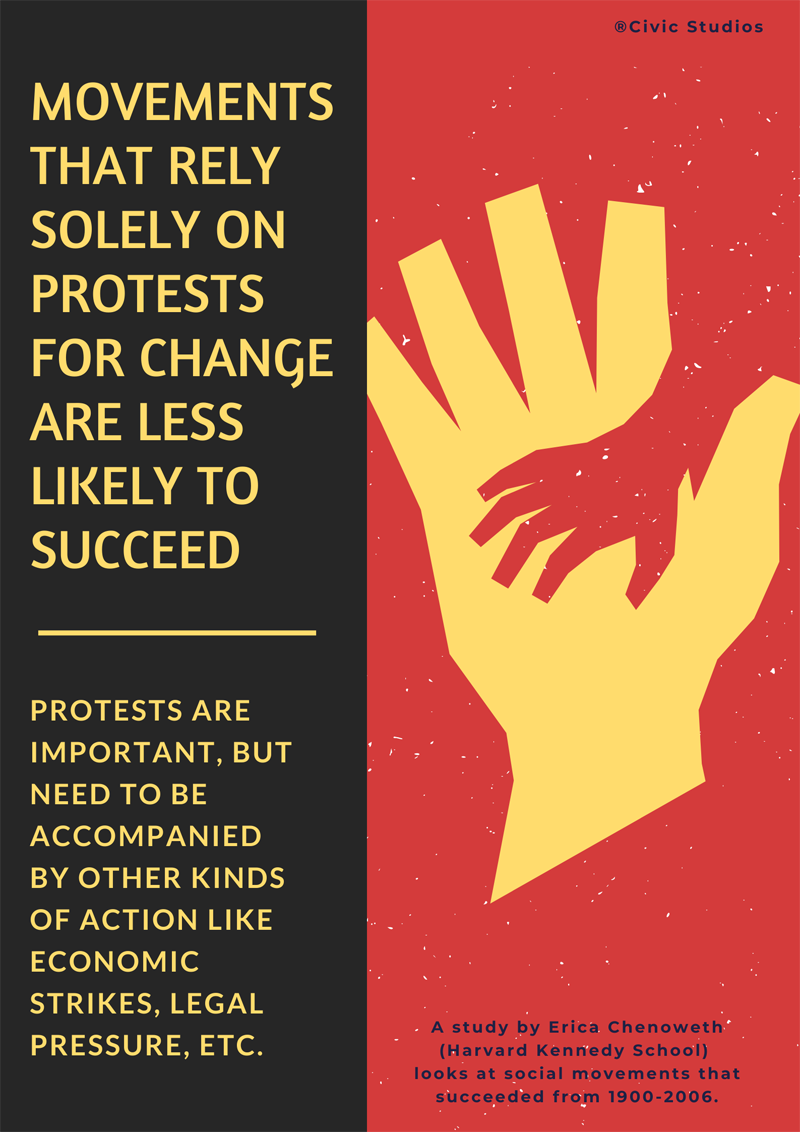 How do both, the pro or anti-CAA/NRC movements in India,  currently  perform against the above patterns?

Since December 2019, India has been witness to protests both against and for the government’s proposed implementation of Citizenship Amendment Act (CAA) in combination with the NRC (National Register of Citizens). The Citizenship Amendment Act, 2019, provides a means of obtaining Indian citizenship to Hindu, Sikh, Buddhist, Jain, Parsi and Christian religious minorities, who fled persecution from Pakistan, Bangladesh and Afghanistan before December 2014. The National Register of Citizens (NRC) will be a nationwide registry maintained by the Government of India for the purpose of mapping and identifying Indian citizens through the provision of certain key documents.

Citizen action in support of CAA/NRC began with protests in December 2019. These have since been limited with occasional protests in 2020 such as one in February in Hyderabad or this one in Boston organized by Indian-Americans. Activism around the movement prevails online in the form of social media posts or press articles outlining arguments in support of the act, while various members of the ruling government note the same in public statements and speeches. Elected members of the current administration have made statements that invoke violence, which prevent the pro-movement from being academically labelled non-violent.

The protests against CAA/NRC have been larger in scale and have sustained from December 2019 across various cities and towns in India. The majority of these have been student-led and women-led. The use of art and music has been central to action on the ground, and these offline activities have been accompanied by online momentum in the form of sharing information and explanations about CAA/NRC.

Similar to the pro-CAA/NRC groups, political leaders have made statements against the act. A shooting that took place during the protests has been accused of being orchestrated by a member of a political party in the opposition, however this has not yet been proven. On ground, organizers of the protests have maintained non-violent action, including in instances of violence by the police.

While it is not yet clear how the pro or anti-movement has been able to shift internal loyalties within those on the opposing side,  there have been requests in the city of New Delhi of residents asking anti-CAA/NRC protestors to not create inconveniences by blocking roads. Similarly, Anjana Om Kashyap (journalist with the Aaj Taj news channel known for her leaning towards the current administration)) and Murli Manohar Joshi (member of the ruling party) made comments against the act. Further, while there has been effort around legislative action and economic strikes beyond the protests on the anti side, how targeted or sustainable these are remains to be seen.

For any of the current movements, pro or anti CAA/NRC, it’s important for participants, organizers, and authorities to communicate and share concerns. Dialogue and negotiation between competing demands and incentives on all sides, for and against, is vital for an eventual resolution.

As part of a recent survey conducted by Civic Studios to better understand thoughts and demands of citizens both for and against CAA/NRC, citizens were asked to write-in any questions they may have for the government, the police, and anti or pro CAA-NRC groups. Data from 1500 respondents was included, and some of the key questions citizens had for the government, police, and both pro/anti CAA/NRC groups have been included below:

Roohi manages the content strategy and creative production at Civic Studios. She is passionate about creating content that drives social impact at scale. Her previous experience has been in content management, qualitative research, and PR across the development and corporate sectors.

Anushka founded the Civic Entertainment project at the MIT Media Lab and Civic Studios in Mumbai. Anushka has a background in applied statistics and digital text analysis, and has previously worked with non-profits and political parties in India. She divides her time between Mumbai, Boston and Chicago.

Namrata has worked in social research, program design and organizational management within the development sector in India. She is focused on using design thinking principles and research to develop effective social interventions, and measure their impact.

Samyuktha has a background in water management, sanitation, social policy and gender. At Civic Studios she conducts research on civic participation theory and practices in India. She also hosts a podcast called In The Field that looks at development issue in India.

Greg is currently a law student in Mumbai and he has 9 years of work experience between the social sector and event management industry. At Civic Studios, he focuses on the intersect of law, civics, and media.

Ethan Zuckerman is director of the Center for Civic Media at MIT, and an Associate Professor of the Practice at the MIT Media Lab. His research focuses on the use of media as a tool for social change, the role of technology in international development, and the use of new media technologies by activists.

Suyash has an eclectic background in film production, social sector communications, policy analysis and academic research. He is keen on exploring the intersection of technology and politics and its effects on social identity and citizen’s movements. At Civic Studios, he will be coordinating research and content production activities.

Umang is an alum of AJK MCRC Jamia Millia Islamia. She was the founder of the feminist movement SlutWalk Arthat Bhesharmi Morcha in Delhi in 2011. She has been working as a filmmaker and video producer for over 6 years, with a focus on telling beautiful stories for social change. At Civic Studios, she focuses on translating civic impact goals into short form content as well as manages production for various projects.